We Search Trusted Retailers DAILY to find you the best deals on Kitchen Taps and the latest Kitchen Taps sale to save you money.

Swich Water Filter Round Handle With Gac And Resin Filter 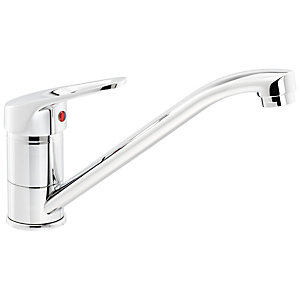 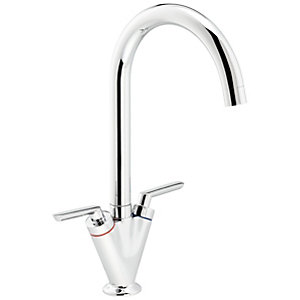 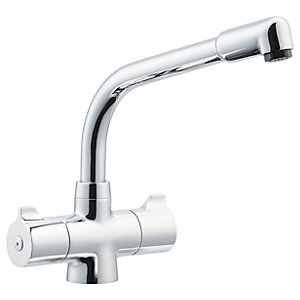 Gone are the days when a trip to the local DIY store to get some cheap kitchen taps was an easy job. With kitchens fast becoming the most important room of the house and designers having a great time getting us to spend more and more money on them, the choice of kitchen taps is massive.

You want a pull out tap to make it easier to clean food, they've got it, you want a tap with a built in filter so your water from the tap is cleaner, yep, there's that too. How about a tap with a built in LED light to tell you how hot, or cold the water is, no joke, they have that too (don't expect this to be a cheap kitchen tap btw). So the choice is huge, but also they do look amazing. They can help bring a modern fitted kitchen and give it that final little detail that will set it off.

So let's have a look at the different types that you'll find in the high street and online stores. These are the best places toll as they cater for all budget types. From the cheap kitchen taps, to the high end kitchen mixer taps, and anything and everything in between.

Single Handle Kitchen Mixer Tap Single handle kitchen taps are the most basic type of kitchen taps available. They are the most popular, and in being so, are the cheapest. They are made with single-lever control so as to control water flow and water temperature with the same lever. Making them very easy to set the right temperature and pressure. They also only require one hole in the sink, or the kitchen worktop. They usually have a long spout and can look pretty modern, without spending a lot of money on them.

Two Handle Kitchen Mixer Tap with Single Hole This style of tap is where the temperate and pressure are controlled from taps that are attached to the mixer tap itself. These also can look great in a modern looking kitchen and can be found at a low price. Very easy to instal and the set the right temperature and pressure.

Pull Down and Pull Out Kitchen Taps These are really great and also very modern looking. They are essentially a mixer tap, but the tap head can be pulled down to get nearer to the sink, or can be pulled out around 30cm to help wash food, or the sink clean. Higher end ones can be found with magnetic heads so just by putting it near to the mixer it will click back into place and make it so convenient to use. They have been around for a few years now so the price has come down some. But they are still more expensive than other, more basic cheap kitchen taps.

Boiling Water Taps These taps are the brew lovers dream. Instant boiling water straight from the tap. They are fairly expensive. They work by having a hot water tank that can be fitted under most sinks and take up surprisingly little space. The tanks are usually up to 2.5 litres, which should be more than enough for busy homes. One thing to note, however, is that they are still pretty expensive so make sure it's something you'll get plenty of use out of before opting to buy one.

Kitchen Filter Taps Kitchen filter taps are perfect for those living in hard water areas, or those who just want to have instant access to clean water. They work by having a filter cartridge place under the sink and out of sight. But within easy reach so that you can change the filter when needed. Then when you turn on, either the hot or cold water, it is fresh and clean filter water.

These are the main types of low priced kitchen taps that you'll find at your local DIY store. We've singled out B&Q and Wickes as the places to look at these kitchen taps. This is because they have great low priced ones from their own range. And some of the higher end ones from other brands too.

Shopping for the stores own brand is a great way to get a cool looking modern tap for a low price. Wickes have some great taps from their own range. They have the cheapest mixer tap from their own brand. £35 for a single hole mixer tap is a great deal. It won't turn many heads though, so if you've got a better budget then the cheapest mono chrome mixer is only £10 and we feel for the extra, it's a far better buy, giving you better value for money.

B&Q Cooke and Lewis range are their own line of kitchen taps, but they are not a budget brand. They are mid range and have some great designs and offer pretty good value for money. Their cheapest kitchen mixer tap is £40, and we think it's slightly nicer in looks than the one from Wickes. But whats great about these stores is that they sometimes offer great discounts and sales, so it's well worth checking both places out if they are near you.

That's another good way to save money on cheap kitchen taps, if you can go to your local store then sometimes they may have some stock that they are selling at a massive discount. These are local deals and not usually advertised on their website's. So if you're up for a real bargain hunt, head to the bargain bins at these stores and see if there's some epic money saving deals for you to find.

Comparing the prices of cheap kitchen taps is fairly easy. Once you've decided what kind of tap your after, then all you've got to do is see hoes selling that style kitchen tap for the lowest price. We've listed all the prices of all the kitchen taps that are sold by Wickes and B&Q. This list also includes any sale reductions and offers that these stores are running at any given time.

So by setting a good budget and not going over it, and by spending a bi of time to search out the best deals you can get yourself a good value for money cheap kitchen tap.